Lock 3 - Portrait of a scientist

The solution is simpler than it looks! Go to the Szalay display and open it with the key. There is a black picture with a photo and a formula, documenting a historical experiment to verify the existence of the neutrino in 1956.  Place the clock face on the picture; it will automatically be in the right position. No need to turn it and no need to use the formula! The white spots are important: they show a path, the „escape of the neutrino” as captured in the experiment. Imagine they are hands of the clock. Notice they point to 7:20, as the clock face indicates. But there is a third hand of the „clock”, showing the seconds. It points to 1.

Dennis Gabor visited Atomki in 1969 (you know this from Lehoczky). He brought the holographic object to commemorate something that had happened 15 years earlier (1969-15 = in 1954).

The signet ring concealed the picture of Julius Caesar – the month of July was named after him – it is obvious, but also mentioned in the MiniWiki article about Caesar.

The arrow (as a sweep hand) on the clock face points to 1. 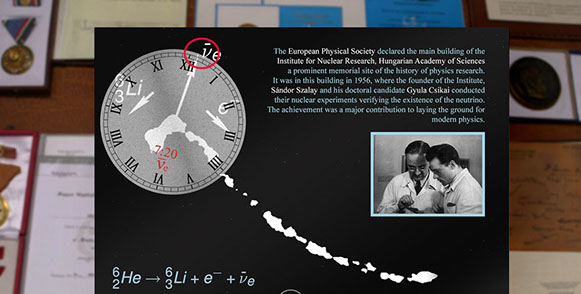 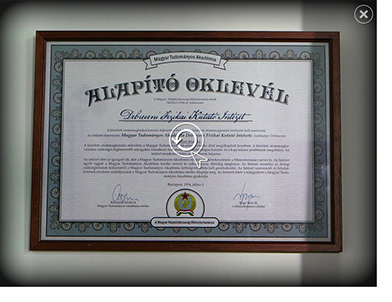 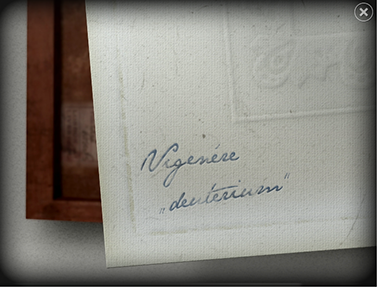 The secret heritage
of Professor Hatvani

ESCAPE FROM THE CELLAR

JONATHAN IS ON THE SCENT

The heritage of Sándor Szalay

THE RIDDLE OF THE SIX LOCKS

Lock 3 - Portrait of a scientist

Lock 5 - There is only one truth